The design of Dignity Health’s “Squirrels and Toasters” campaign centered on a poster series designed to support an organization-wide transformation and bring about a more metric-based approach to achieving better patient outcomes and experiences. It’s won Dignity Health first place in the “Illustrated or Animated Design” category of PR Daily’s 2018 Video & Visual Awards.

The idea was to build employee literacy about the big changes Dignity wanted to make and help employees see how their actions would contribute to the achievement of those goals. The campaign featured big, bold graphics unlike any the organization had seen before, yet remained consistent with Dignity’s graphics standards.

The big images of toasters, acorns, umbrellas and other subjects that reinforced the narrative were eye-catching, drawing viewers to short blocks of text that helped build employee literacy around the business impact of ground-level actions. Dignity notes this means the average nurse or aide could contribute by clocking in and out on time, keeping inventory in stock rooms, washing their hands every time they saw a patient and taking better care of equipment so it would last longer.

One poster reads, “Squirrels don’t belong in hospitals,” (with a graphic of acorns above it), noting that employees shouldn’t stash supplies where nobody else could find them. “When you do this,” the poster declares, “it means that needed supplies are being taken out of ‘rotation’ and we run the risk of them becoming outdated before they are used.”

The visuals—all clearly part of a design suite—drew attention to a campaign that produced genuine business results, including improvements in patient experiences and in the EBITDA margin. 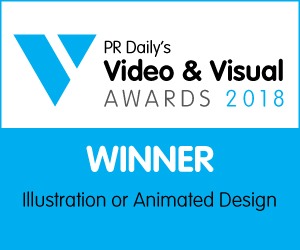