Orange and Rockland Utilities (O&R) is proud of its tradition of comment to military veterans, including those employed by the utility. “We understand that we have a responsibility to do what we can to help those who gave so much,” it says. A short video produced for Veterans Day to showcase that commitment has won first place in the “News Story Video” category of PR Daily’s 2018 Video and Visual Awards.

The video highlights one employee suffering from post-traumatic stress disorder (PTSD) following his service in the U.S. Army. Nick Leslie is helped by Juliette, his mixed-breed shepherd service dog. “Our goal was to bring Nick’s story to our communities and fellow employees,” O&R’s Richard Feger explains.

In the video, we see Nick and Juliette on his meter-reading rounds, something O&R has no problem with (but that would be a policy violation in other organizations, disqualifying some veterans from taking the job). Nick even points out that there are days his PTSD leaves him unmotivated, but Juliette’s desire to go to work gets him moving.

The video was produced—with a zero-dollar budget—in two versions for multiple delivery methods; the Facebook version delivered 2,300 views within 24 hours of its posting. It also provoked comments like, “That makes me proud to be an O&R retiree.” 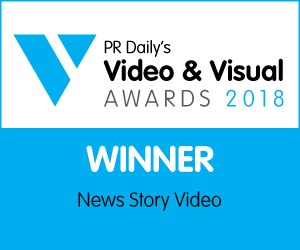