The goal behind the “Realistic Job Preview” (RJP) video series from T-Mobile (and produced by J. Walter Thompson INSIDE, an employer-branding/employee communications/recruitment advertising agency) was well thought out. It’s won first place in the “Recruitment or Employer Branding Video” category of PR Daily’s 2018 Video & Visual Awards.

New hires often leave in the first couple months or years of employment because the reality of their work doesn’t align with the vision the employer created during the interview or in its recruitment materials. The RJP series aimed to show candidates what working at T-Mobile would truly be like.

The video portrays work on the corporate side of the company, showing young employees leading important departments and engaged in meaningful work while wearing jeans and T-shirts. The series also includes a video aimed at retail candidates and interns, featuring employees who feel like fully-respected members of the team.

The videos capture the company’s culture and convey the fact that people working at T-Mobile are happy and satisfied. They also depict the diversity among the employee ranks, the commitment to building customer relationships and the company’s focus on its people. 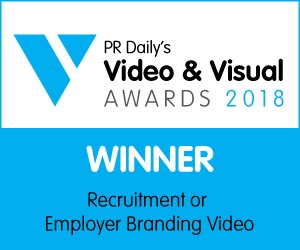