All manner of human drama occurs inside a hospital. Mothers give birth; doctors cure diseases and surgeons fix ailments; people grow ill and, sometimes, they die.

“They started calling the blood bank for more units of blood … ultimately, they infused her with over 50 unites of blood,” Steven Bloom, Angie’s husband, explained in a video produced by UC Irvine Healthcare. “The result would’ve been much different if we wouldn’t have had that blood bank so close.”

Angie survived the ordeal, thanks to the care she received at the facility, which has the only high-risk maternal-fetal program in Orange County.

The story of Angie was part of the organization’s fall 2011 advertising campaign, Discover Why, in which UC Irvine Healthcare sought to raise awareness of its facilities, doctors, and programs. The campaign featured three patients whose lives were saved at the facility; among the patients is Angie.

Her story became a compelling video of less than four minutes, shot in the Bloom’s home and featuring the entire family. Steven narrates most the story, because Angie was unconscious during the ordeal. The structure of the video is tight, and the pacing more closely resembles a news story, not a video from an ad campaign.

The video was posted to YouTube and promoted on UC Irvine Healthcare’s various social media channels. It also appeared as part of a feature story on the Blooms on the organization’s intranet.

Other websites and publications picked up Angie’s story, and it has led to spin-off stories. The video has grabbed nearly 600 views on YouTube, the most of any UC Irvine video on its YouTube channel. Both Angie’s story and video received 171 Facebook “likes” and was shared 57 times.

But the best news of all is that Angie, her husband, and their three girls are healthy. 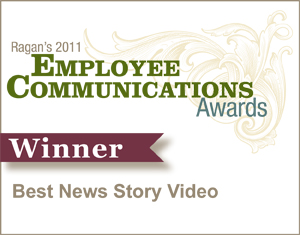