The United States Geological Survey is the co-winner of the Best Employee Engagement category in Ragan’s 2013 Employee Communications Awards.

Here’s how this big federal agency, a proud public servant, avoided a downward spiral because of shutdown-related budget cuts in the fall of 2013:

Its director, the blunt-talking Suzette Kimball, committed months in advance to making the consequences of the sequestration known to everyone in her 9,000-person agency.

To keep the agency running at a high level, Kimball had to talk USGS idealists out of making martyrs of themselves by working impossible hours. Many were already working extra hours.

The USGS had the luxury of a strongly engaged workforce used to making more out of less for the sake of the earth sciences—and the nation—they loved and served.

So Kimball and the USGS internal communications team faced a unique problem: how to keep highly engaged staff feeling wanted and needed, in the face of undeniable evidence that a powerful bloc of Congress saw them as expendable.

In response, Kimball and the internal communications team began in March 2013 to “improve the visibility and exchange of bureauwide conversations” on social media:
• They delivered timely info on the shutdown to employees via email and blog posts, and worked to increase USGS workers’ trust in senior leaders.
• Kimball used the shutdown as a springboard to talk to staff about making the most of limited resources to build a stronger USGS.
• The director’s March 4 and March 11 blog posts “redirected” shutdown frustration in a positive way and sounded a call to action.
• Two well-attended town halls in March and April reinforced Kimball’s messages.
• Kimball asked on the USGS idea-sharing forum for ideas on using budget cuts to build an even better USGS.

The results were eye-opening:
• The March town hall was the best-attended in history, with 400 live attendees and 800+ virtual.
• Prior to the town hall, 86 percent of employees felt senior leaders had communicated moderately to extremely well about the shutdown.
• The 2,053 unique visitors in March to the Leaders Blog doubled February’s total.
• The 457 unique visitors to the Leaders Blog on March 12 set the single-day record.
• More than 100 employees commented on the director’s March 4 and March 11 posts.
• Kimball’s call for ideas on the idea-sharing forum sparked 62 ideas, 14 of which received 100 employee votes. The leading idea got 302 votes.
• The executive leadership team met in the fall to consider employee ideas, with the internal communications team giving live updates of their discussions.
• In late October, leadership asked staff what lessons the USGS could learn from the shutdown. Twenty ideas were submitted, five of which got more than 50 votes.
• Post-shutdown, 82 percent of the staff felt that leaders communicated very effectively (50 percent) to moderately well (32 percent). 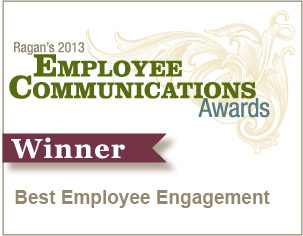