Hurricane Sandy was the most destructive hurricane in 2012, pounding the East Coast in late October.

Like many area hospitals and organizations, NYU Langone Medical Center was still recovering from challenges the storm wrought months later. The rebuilding process was not quick, to say the least.

In an effort to show appreciation and support for the determination and resilience of staff, and inspire them in the continued recovery process, the center’s dean and CEO, Dr. Robert I. Grossman, sent an executive letter to the staff, which won Ragan’s 2013 Employee Communications Award for Best Executive Letter.

Titled “Our Ongoing Recovery and the Days Ahead,” the letter began:

Three months ago almost to the day, NYU Langone Medical Center encountered the most significant challenge in its 172-year history. Superstorm Sandy brought a surge of water that broke down steel doors—but it did not even come close to breaking us.

He acknowledged the storm’s lasting impact:

For many who are going about their work in new places, routines may never return to the same “business-as-usual” of before the storm.

Yet we at NYU Langone are anything but “usual.” We proved this during the storm, as faculty, staff, and students safely evacuated more than 300 patients and worked to save decades worth of research.

He encouraged his team going forward and promised to address what challenges remain:

I know that we will return to—and surpass—our performance pre-Sandy in all that we do. I know it because I witnessed first-hand the night of the storm and in the months thereafter the values that define the true spirit of our Medical Center community.

We congratulate the winning team on their efforts: Olivia Smith, Lori Donaghy, and Lisa Greiner. 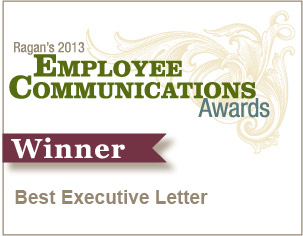