Michael Schofield, a diabetic AT&T employee, needed an experimental procedure that required a donation of pancreatic cells for his liver.

His co-worker Elizabeth Baptiste was the grieving mother of a young man who died in a car crash, but had left instructions that he wanted to be an organ donor.

Somehow fate brought the two together when Michael Baptiste’s cells ended up in Schofield in an experimental, life-saving treatment. To the surprise of Schofield and Elizabeth Baptiste, they both worked at AT&T.

The story about this remarkable event wins first place in Ragan’s 2013 Employee Communications Awards for Best Long Feature Article. AT&T Insider staff writer Jessica Horton told the story in an internal article, and CNN followed up on it after AT&T also posted it externally.

Although this was primarily a human-interest story, it reminded employees of AT&T’s health benefits, the company reports. The transplant of pancreatic cells into a diabetic patient’s liver was new and had never before been funded by a private health care plan, AT&T states.

The article generated more than 21,000 hits and 845 thumbs ups, AT&T says. And get a load of the kind of employee comments it received.

“I have always been on the fence about becoming an organ donor,” one employee wrote. “Your story has convinced me that it is the right thing to do. If one day something were to happen to me, I could hopefully help someone else have a chance at life. Thanks for sharing.” 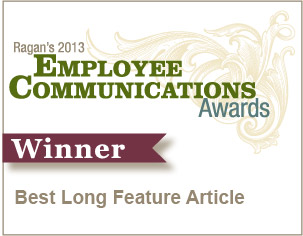