Once JLL’s communicators adopted an email system that allowed them to view metrics, they were in for a surprise. Employees weren’t reading the long, text-based quarterly emails from the CEO detailing the company’s performance.

The arrival of a new CEO opened the door to a new approach, one consistent with the new CEO’s style and preference. Instead of a wordy email, the CEO was able to look employees in the eye and talk about performance by recording a video. Not only was this a more personal approach, it also gave the CEO ownership of the message (as opposed to a less personal email that could easily be shrugged off as another message from the communications department).

Recognizing that some employees wanted more information than could be contained in a two-minute video (the length of which was chosen to accommodate the patience most people have for videos), the team also developed a more detailed infographic, again eschewing the long narrative text employees had already rejected.

The strategy paid off, with open rates improving 50-60 percent for the earnings email, and 70-80 percent more office-based employees opening the message. A substantial number of employees clicked through from the email to related content, but only 20 percent watched the video and viewed the infographic, validating the decision to offer tiers of detail. For those who did watch the video, on average they viewed more than 90 percent of it.

For its willingness to embrace nontext alternatives that responded to employee preferences, we’re happy to award JLL the prize for Best Executive Communication in Ragan’s 2014 Employee Communications Awards. Our congratulations go to Chris Close, Scott Kallstrand, and Margie Olsen. 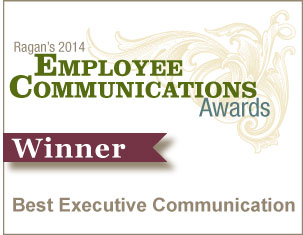