In its 2015-2016 “Annual Enrollment Book,” BlackRock communicators made notable improvements over its 2014-2015 book: They simplified its cover and inside cover, removing more than 100 words of small, hard-to-read type for one simple call to action in larger type. Throughout the book, communicators removed blocks of small type and substituted more white space and immediately informative graphics—much more visual communication.

Another example: BlackRock took a big step in its Annual Enrollment book by using captioned graphics instead of blocks of text to explain a fairly involved benefits subject: How the family deductible works for the Health Savings PPO and the Traditional PPO.

Several other distinctive features lift BlackRock’s benefits package and its communications out of the ordinary. For example, its “myHealth+ points” program, which rewards healthy employees with up to $500 a year for following healthy diet and exercise habits, and for engaging in interactive online enrollment—for which the employee earns 100 Health+ Points toward a maximum of 750 points and the $500.

The Annual Enrollment book is full of graphics that explain how one can register and use telemedicine, how to save money by finding the correct facility to visit in order to treat a particular ailment, and how to get information on other important medical benefit topics.

Also cause for readers’ gratitude: BlackRock’s benefits literature is thankfully free of stock photos of men, women, and children grinning gleefully about their families’ benefits packages. 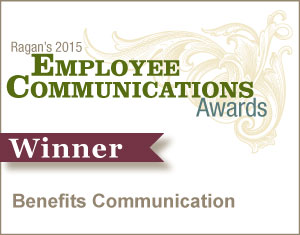