FRHI, a global luxury hospitality company, was created by the merger of Fairmont Hotels & Resorts, Raffles Hotels & Resorts and Swissôtels & Resorts. To support the effort to engage employees in the company’s new identity, the company introduced a social communication platform, FRHI Talk, accessible on computers and mobile devices. This successful effort has won FRHI first place in the “Employee Engagement” category in Ragan’s 2015 Employee Communications Awards.

FRHI Talk lets employees share content ranging from questions and feedback to achievements, events, hotel-specific initiatives, and celebrations. The FRHI Talk stream is front and center on the home page of the intranet, raising awareness and demonstrating that employees are using it.

Digital signage and a biweekly email ensure visibility among employees who aren’t able to use the platform directly. Streams were added where employees could collaborate on departmental and regional issues.

As employees began relying on FRHI Talk, the company began injecting messaging that drove traffic to other communication platforms, including its intranet (where a colleague blog and company news stories are published). Vital to the success of a social platform, executives were encouraged to post frequently, which sets an example while granting implicit permission for employees to use the network.

Nearly every employee with a company email address (required for participation) has joined FRHI Talk. Join rates are fine, but are they using it? One measure of success is the 700 posts and 800 comments the network attracts each week.

Most important, though, is the increase in engagement recorded in a formal survey and the cost savings accrued by using the channel instead of other communication tactics.

The combination of a sound strategy, effective tactics, and meaningful results adds up congratulations to Alexandra Zeifman and Andrada Paraschiv. 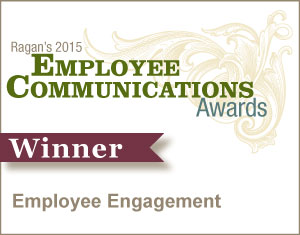