CHG celebrates diversity among its workforce. That diversity, and a culture in which employees can express themselves, is a key element of CHG’s recruiting message, “Free to Be Me at CHG.” The phrase, originally coined by CHG’s LGBTQ Pride employee group, sums up CHG’s supportive corporate environment, as well as the individualism the company nurtures. And, for that effort, CHG has won first place in the “Recruitment Video” category in Ragan’s 2015 Employee Communications Awards.

The 20 short vignettes cover not just the diversity of staff, but also its locations. The messages in the videos support multiple goals and audiences. While crafted for recruiting purposes and posted on a dedicated page of CHG’s website, the videos were also shared internally to reinforce the company’s culture and contribute to employee retention, as well as being shared socially on YouTube, Facebook, Twitter, and LinkedIn, and highlighted in several posts on the company’s external blog.

Evaluation of the series’ success was assessed multiple ways. Retention trended up in the wake of the campaign and employees signaled their intent to remain with CHG in the organization’s Employee Opinion Survey. Employee feedback was strongly positive. Externally, the videos drew 1,600 views on YouTube alone. The campaign attracted attention from a number of news outlets.

Any way you look at it, the video series delivered, thanks to the good work of CHG’s communication and marketing team, and, in particular, Michael Waterman, Ryan Terry, Jared Walker, Liz Cornwall, Erica Hone, Shonda Smith and Suzanne St. Pierre.

Adrienne Davis – Free to Be Me at CHG from CHG Healthcare on Vimeo. 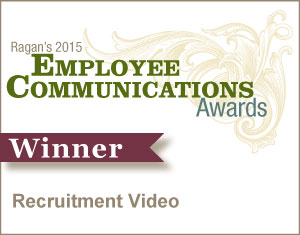