In most organizations, Yammer is introduced with little strategy: “Here’s Yammer, everyone. Good luck.” Not at Hewlett Packard Enterprise, where Yammer was selected to replace other internal social media employees weren’t using. For implementing a comprehensive and strategic approach to the launch, HPE has won first place in the “Use of Social Media” category of Ragan’s 2015 Employee Communications Awards.

The internal marketing campaign to launch “ConnectHP,” as the Yammer implementation was named, featured the tagline, “My contacts. My content. My company.” Leaders were educated about the benefits and enlisted to support the rollout—a critical element most launches of internal social networks miss. Managers were also included, with special content and conversations enabled by a partnership with the HR department.

At the employee level, ambassadors (“champions” in HPE’s parlance) were recruited (twice as many volunteered as the plan called for) and provided with a toolkit to enable them to advocate for adoption of ConnectHP among their colleagues.

On the creative content side, the ConnectHP marketing team crafted a video, emails from senior executives, news articles, posters, and banners. The effort was concentrated on a “30 Days of ConnectHP” campaign that featured weekly challenges, Buzzfeed-style quizzes, prizes, and more.

By any measure, the rollout was successful, with 20,000 employees joining within the first two weeks of the launch, including nearly 70 percent of all managers. More than 1,000 active groups are now buzzing with conversation and collaboration. 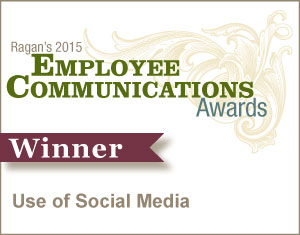