Pharmaceutical organization Astellas is serious about its culture, which is focused heavily on its journey to One Astellas, a multi-year campaign “rooted in authentic imagery of those who are most central to our culture: our patients and our employees.” The success of the campaign has earned Astellas first place in the “Visual Communication (Print)” category of Ragan’s 2016 Employee Communications Awards.

To help realize its vision, communicators reviewed similar initiatives from other successful organizations, evaluated the strengths of its existing culture, and consulted with employees to create a new initiative: The Culture Narrative.

The initiative is unified by striking photography obtained from a nine-day photo shoot, along with patient photos. Employees received a Culture Narrative publication; they also have access to the content via a portal on the Astellas intranet.

Graphics were produced for conference rooms, hallways, floors and stairwells. Thirteen-foot hanging banners were suspended in Astellas locations, laptop cling decals were handed out, a desktop calendar distributed, and PowerPoint templates updated to include the campaign’s visual themes.

So far, more than 1,000 employees have shared their personal pledges on the wall, just one metric that demonstrates the effectiveness of the campaign in only its first five months.

Congratulations to Jennifer Saputo and Trent Richardson for their stellar work on the initiative. 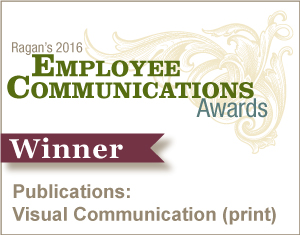