Employees who work in manufacturing and other functions where attention must be paid to safety often ignore reminders to wear personal protection equipment. At Honda R&D, communicators decided the best way to get them to pay attention was to tap Honda motocross racers as the faces for wearing safety gear. This innovative approach has earned first place in the “Visual Communication” category of Ragan’s 2018 Employee Communications Awards.

The idea emerged after an associate at Honda R&D Americas in Denver submitted it as part of a safety contest, the concept being, “If Honda racers wear safety gear, so should I.” That associate was declared the contest winner, leading the Corporate & Technical Communication Department to reach out to him to refine the tactics for how banners bearing the racers’ likenesses would be created, approved, produced and displayed; they based their work on initial mock-ups the contest winner had created.

It took time to get the OK from the selected racers, after which images, layouts and messaging were approved and production began. Ultimately, the vertical banners were simple: The top third is a photo of the racer, and the bottom shows the racer in action. In between are the words: “Be like (Ken or Marc): Wear your PPE.”

The design is clean and uncomplicated—and has been highly effective where the banners have been deployed at Denver and Ohio locations.

Congratulations to Jennifer Dahlgren and staff members of the communication department. 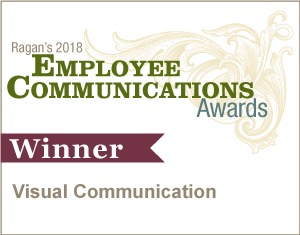