When Rochester-based UR | Thompson Health prepared to open its new Dr. Laurie Sands and Constellation Brands Breast Imaging Center, it hoped to raise awareness of the need for annual cancer screenings. So the organization and its creative agency, Dixon Schwabl, opted for a tasteful bra fashion show, the first of its kind ever held in Rochester. The show’s impact has won the team first place in the “Best Event” category of Ragan’s 2016 Nonprofit PR Awards.

The team adopted “Bra-vo for Breast Health” as the theme of the show, scheduled two weeks before the center’s grand opening, and secured partnerships from bra manufacturer Spanx, which provided the fashions, and retailer Lord & Taylor, which provided a location for the show. A local news anchor served as emcee and local businesses donated items for swag bags.

Sixty-two local artists hand-decorated the bras, which were displayed outside the department store where passers-by could vote on their favorite. The winners appeared on stage during the show.

News media outlets were approached to promote the event, a PSA aired, a landing page was created, and promoted posts were pushed through social networks. The campaign earned nearly 175,000 impressions with 3.5 percent of the audience engaging with content (compared to an industry average of 1.4 percent).

The PR efforts resulted in more than 6.3 million media impressions. Two hundred people attended the event, but most important, scheduled mammograms increased by 33 percent, the true measure of the campaign’s success. 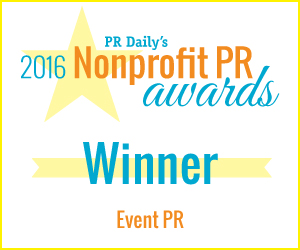