Founded by former Canadian Prime Minister Paul Martin, the Martin Family Initiative is committed to improving K-12 education for indigenous children as well as improving “the wider determinants that influence their educational outcomes, including health and well-being.” Over time, though, the organization began to feel disconnected from its stakeholders, including the indigenous leaders and educators it serves. Its efforts to reconnect have earned the Initiative first place in the “Rebranding” category of PR Daily’s 2017 Nonprofit PR Awards.

The Initiative contracted with Klick to establish a new brand identity “to help bridge that connection to the community but also create an indigenous brand that could potentially grow beyond just education.” Klick sought to adopt a logo that would reflect the artwork so immediately identifiable as part of the indigenous culture.

At the same time, Klick recognized the importance of retaining an element—hands—of the original logo. Embracing the look and feel of aboriginal art allowed Klick to drop the word “aboriginal” from the organization’s original name, “The Martin Aboriginal Education Initiative.” The art itself would convey that connection.

One challenge Klick faced was the unique artistic style of each indigenous culture group (such as the Inuit tribe). To address this, Klick studied styles from across Canada to create a logo that embodied these styles in a single image that also fulfilled the requirements of a logo that would be used in multiple channels. 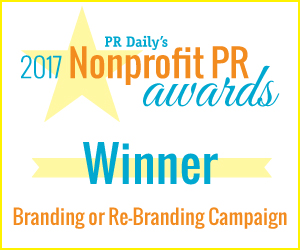