The homeless population of Seattle grew 21 percent in 2017 alone, making it the largest in the nation. The Union Gospel Mission has been caring for the city’s homeless for 85 years, but the numbers have grown so much and so quickly that the Mission’s resources were running thin. Research showed there wasn’t strong awareness of the Mission or the many services it provides to the homeless, leading the organization to conclude it had to take steps to raise its visibility. Its success has earned it first place in the “Advocacy or Awareness Campaign” category of PR Daily’s 2018 Nonprofit PR Awards.

Targeting purpose-focused millennials, the Mission worked with The Thomas Collective to develop the #LookUp campaign, an innovative and striking awareness campaign. The cross-organizational team used “Lost Angels,” an emotional exhibit of photographer Lee Jeffries’ portraits of the homeless, in an outdoor environment on a massive scale.

The city became the gallery, with haunting images projected onto buildings, compelling passersby to not only stop and look, but to spend time gazing into the eyes of this usually hidden population. The uniqueness of the campaign naturally attracted media attention, supported by an outreach effort.

The metrics included a dramatic increase in unaided recall of the Mission and its work with the homeless, an article on the front page of the Lifestyle section of the Seattle Times, reports on three TV networks and 24 million impressions from earned media. Donations increased 100 percent. 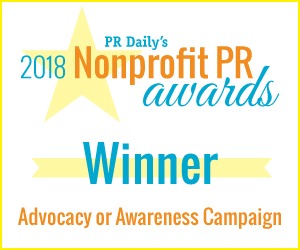