New York. Chicago. Los Angeles. Boston. These are the cities you usually see associated with health-related thought leadership. List other cities where journalists would seek input on medical issues, though, and odds are Reno, Nevada wouldn’t make the cut. That was the challenge Dr. Tony Slonim faced as president and CEO of Reno-based Renown Health. The success of Renown’s communications team in meeting that challenge has earned it first place in the “Executive Visibility” category of PR Daily’s 2018 Nonprofit PR Awards.

Slonim’s appearance in top-tier media was the goal. The detailed, meticulously crafted communications plan employed to achieve that goal adhered to a fundamental model: research, identifying the right publics, implementing the plan and evaluating results.

The research was comprehensive, assessing which health care CEOs were posting on social media and how much those posts accounted for coverage elsewhere (and getting listed on Modern Healthcare’s “Top 50 Most Influential Physician and Executive Leaders” ranking). The research also explored the best practices of PR officers working for health care organizations that had appeared on the list, along with a wide-ranging host of other activities.

The team also identified the audiences it wanted to reach (including employees). Implementation was impressive and (again) incredibly detailed. Setting up social media accounts and guiding Dr. Slonim’s use of the accounts was a key part of the plan; members of the team were trained by Renown’s consultant on best social media practices. Video content was added to the Renown CEO’s blog; videos were also shared over a newly-established CEO YouTube channel.

Although Dr. Slonim did not make the Modern Healthcare list, the effort to get him there led to other significant achievements, including a remarkable amount of national coverage from outlets including CNN, USA Today, The Washington Post and The New York Times. 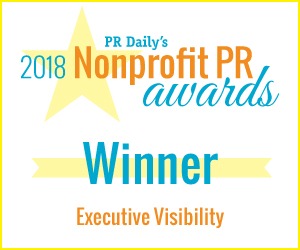