The retailer’s agency, Mullen Advertising, was tasked with drumming up more awareness than the year prior with a limited budget. The drive attracted a record-breaking 130,171 garments due in large part to a robust social media presence.

For their efforts, Mullen, together with PR Newswire, take top honors in the Best Corporate Social Responsibility category of Ragan’s 2013 PR Daily Awards.

The program kicked off at the 66th Annual Tony Awards Backstage Creations Celebrity Retreat, where Broadway stars interacted with the brand by stopping by the National Suit Drive booth.

In addition, for every mention of the National Suit Drive on Twitter, using hashtag #giveasuit, or on Facebook, $1 was donated to the cause for up to $25,000. This became a trending topic across Twitter on July 17 when Men’s Wearhouse exceeded its $25k donation goal. Users were also invited to share images and videos, and to track real-time campaign activity and donations through the live donations counter on the National Suit Drive Facebook tab. 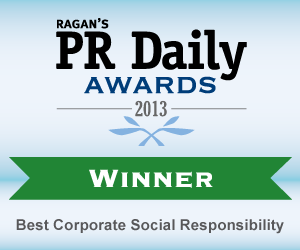