The winner of the Best Speech category in the 2013 PR Daily Awards is the United States Green Building Council and its CEO, Rick Fedrizzi.

Fedrizzi delivered a rousing revival-tent wakeup call to attendees of the USGBC conference in San Francisco in November 2012.

Fedrizzi’s words proved so effective at getting his main idea across to his 6,300 in-person listeners that attendees spontaneously created a Twitter hashtag for his speech that used his theme, “We Are Right.” They were not instructed or persuaded to do this by USGBC publicists.

Fedrizzi’s message: The women and men who fought tirelessly for women’s and minority rights in the 19th and 20th centuries faced decades of stubborn resistance from powerful interests and disbelievers in the equality of women and persons of color. Victory was never certain, and total victory has still not been achieved.

Today, the same forces oppose greenness and sustainability. Reactionaries are still wrong, Fedrizzi asserted. And “we are right.”

This speech had a powerful effect on USGBC and WGBC (World Green Building Council) members around the globe. Tweets by live attendees were sent every three seconds during Fedrizzi’s speech at the opening day plenary session.

Jennifer Easton, spokesperson for the USGBC, summed up the occasion by saying, “Bringing the opening plenary speech to life is a time-consuming, but always worthwhile ordeal … we were extremely excited when we saw users organically tweeting [the] hashtag ‘#WeAreRight,’ the mantra of Rick’s speech.”

USGBC troops were primed for a rousing, pulse-raising, heart-pounding, uncompromising call to battle, and they got it. Congratulations to Rick Fedrizzi and the USGBC public relations staff. 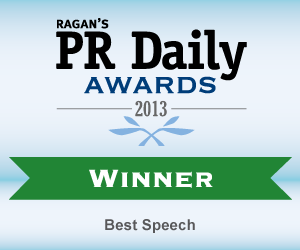