Irvine, California, is a planned city. Affluent, coastal, accessible, home to a University of California campus and one-third of America’s Fortune 500 companies, Irvine boasts more than 250,000 residents and a designation as the safest city in America. Yet when competing for Amazon’s second headquarters, Irvine was excluded from the conversation, pointing out the need to promote the area—starting with its own population. The result is the Irvine Standard, winner of first place in the “Print Publication” category of Ragan’s 2018 PR Daily Awards.

Objectives included educating residents on the city’s master plan, dovetailing with social channels to foster a sense of pride and generate positive sentiment among Irvine residents, influence public opinion about the city’s growth and prospective development, and create a lasting media brand.

The agency Idea Hall created the brand for the Irvine Standard, and handles production and printing of the monthly newspaper; it also established the publication’s website as a companion to the printed piece, along with the social media channels.

The social media channels have attracted 12,000 followers, 10% of the city’s population, who delivered 12,500 engagements; 40% of the traffic to the Irvine Standard website is generated from the social channels.

The publication has also had an impact on public opinion, contributing to the defeat of a “no growth” petition required for a ballot initiative. The success of the newspaper has led the city to expand distribution; it’s now available in retail centers, apartment centers, hotels and office buildings. 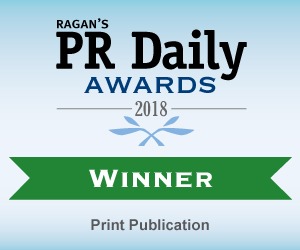