The national sales meeting for big-box hardware retailer Lowe’s is an opportunity for 3,000 leaders from across the organization to gather in Las Vegas to discuss the organization’s strategic direction, plan for the months ahead and get prepared and motivated to lead their teams through the first half of the year. Videos shown at the event are designed to inspire leaders—and one has taken first place in the “Interview Video” category of PR Daily’s 2017 Video and Visual Awards.

The digital content team found the perfect story for creating the conditions to motivate and inspire. A video was prepared not to set expectations of behavior, but to demonstrate just how much of a family Lowe’s employees are.

The video tells the story of an employee, Quincy Elliott, who was suffering stage four renal failure; his kidneys were shutting down. Elliott’s wife told a regional VP what was happening. When Elliott told his team, market sales manager Justin Wear decided to donate one of his own kidneys.

The video was shown in a presentation at the sales meeting, culminating with Elliott and Wear joining executives onstage (Elliott wearing a surgical mask) to the thunderous applause of the audience.

Congratulations to all involved in the production of this moving video. 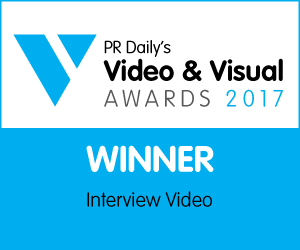