Managing an intranet—especially for an organization the size of S&P—is a job with a lot of dimensions. Ronald Gilliam, who manages the intranet for S&P Global, piles on additional activities. Gilliam led the team that ultimately moved communicators away from email and to a more modern system, cutting the previous workflow process in half and establishing a culture of transparency. Gilliam was also deeply involved in a campaign to get employees to use the intranet as a source of information about the company’s LGBTQ Ally Campaign. His commitment and energy have led S&P to recognize him more than 10 times with various awards and honors, reflecting his role as a thought leader and diversity champion. 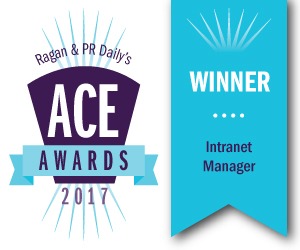