There’s no question that Las Vegas can be expensive, but it’s far from the average visitor who could blow $1 million over a weekend. Given the fascination by everybody else over how the uber-rich live, it was an inspired idea for Aria Resort & Casino Las Vegas to produce an infographic that details the various ways the 1 percent could blow through a cool million in two nights and two days.

Our choice for Best Infographic in Ragan’s 2014 Content Marketing Awards was selected based on both the concept and the execution of the entry, which was designed to get people clicking back to the Aria Resort & Casino website, based on the understanding that backlinks continue to be the top ranking factor in Google’s search algorithm.

The tower infographic relies heavily on images that merge seamlessly one into another, each representing a step in the weekend, beginning with arrival via a private jet and all-weekend limo service to the hotel, which weighs in at $10,300. Many of the expenses are directly related to services available at the Aria, such as dinner at Jean Georges Steakhouse, featuring the menu for the meal selection and a graphic of the $38,200 bottle of wine. But the infographic also features external activities, too, such as a private tour of the Bellagio Fountains ($7,000) and car racing ($10,800).

The visual approach makes it impossible not to scroll through the entire infographic to see how this fictitious visitor spent $1 million. And the infographic did its job, driving shares on Facebook, Twitter, Google+, LinkedIn, StumbleUpon, Reddit, and others, and earning coverage from local and national media. 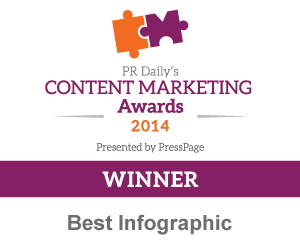