Organizations from around the world field teams to run in the prestigious Boston Marathon. Perkins School for the Blind is no exception. Five members of Team Perkins—a group of individuals who ran in the event to raise awareness and money for the school—were profiled in a promotional video titled “I Run for Perkins,” filmed and produced by Anna Miller, Perkins’ publicist and staff photographer.

Selecting five team members who would ideally project the work Perkins does, Miller conducted in-home interviews (including one via Skype with a participant in Hong Kong), as well as documenting their training. In addition to obtaining high-quality footage, Miller edited the footage with a high degree of professionalism, producing an end product that compels viewers to watch through to the very end of its six minutes.

Produced with a budget of $0, the video supported a fundraising initiative for Team Perkins, which surpassed its goal by 120 percent. The video also reached thousands of people via distribution on YouTube, Vimeo, and Perkins’ various social media accounts. The video was embedded in donor emails and shared directly with key audiences, including the executive director of Perkins Trust, who called it “a bonding experience for team members.” He also noted that new uses for the video are still being found.

For ingenuity in meeting the high standards of video production without a budget, we’re thrilled to present Ragan’s 2014 Content Marketing Award for Best Video to Anna Miller and Perkins School for the Blind. 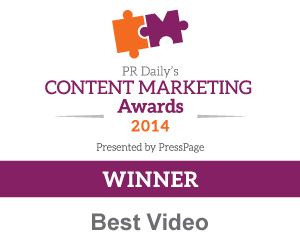