Michigan-based organizations supporting the auto industry have an employee pipeline to fill, but they face an exodus of talented workers attracted to tech companies and startups located outside the state. One of these auto suppliers, Yazaki North America, took on the challenge, and its efforts have won it first place in the “User-Generated Content” category of PR Daily’s 2016 Content Marketing Awards.

Some interns shared photos of themselves with executives or from testing facilities. While others shared insights into their daily activities as interns. The common thread was their newfound interest in one of the country’s oldest and technologically advanced industries. Over the summer #InternYazaki hashtag appeared on Twitter and Instagram over 1,300 times, with each post highlighting a dimension of being a Yazaki intern and being the future of automotive.

Before long, the movement took root on Snapchat, as interns participated in a takeover of Yazaki’s official account—an increasingly popular use of Snapchat by companies—to give viewers a behind the scenes look at their journey as they experience everything the auto industry has to offer. Each intern takeover produced an average of 50 new followers.

The campaign peaked when several interns were invited to attend a conference where they provided live content and fresh-faced commentary for an automotive media publication. At the conference, which was mostly attended by automotive executives, the Yazaki interns quickly gathered attention spawning Q&A sessions about Millennials and their thoughts on recruiting, work culture, and the future of the automotive industry.

Traffic to Yazaki’s website increased by 35 percent each month; the campaign generated 54,000 impressions and (more importantly) an increase in internship applications.

Congratulations to the team behind the winner: Misty Matthews, Katelyn Davis and Samantha Roberts. 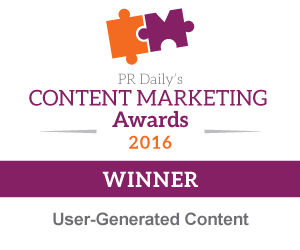