If there’s one thing most communicators can do, it’s write a good article. Even when one looks past the emotional wallop of the story, the grace and style of the writing stands out in “‘My God, it’s better’: Emma can write again thanks to a prototype watch, raising hope for Parkinson’s disease,” which has taken first place in the “Article” category of PR Daily’s 2017 Content Marketing Awards.

The story ran on Microsoft’s new blog, Transform. The article focused on Emma Lawton, a graphic designer whose ability to hold and use a pen was compromised by Parkinson’s disease. Her friend, Haiyan Zhang—a fellow London resident and a Microsoft researcher—sought a way to help, and wound up designing a Windows 10 tablet connected to a watch that vibrates in a manner that “hacks the brain,” causing Lawton’s brain to focus on her right wrist, “apparently reducing the brain’s messages to that spot.”

For the first time in a long time, Lawton was able to write letters and draw lines. The article deftly combines multiple elements—Lawton and Zhang’s friendship, their backgrounds, the technology and the devastating effects of Parkinson’s disease—into a cohesive, compelling story, enhanced with powerful images that included some of the words and lines Lawton was able to produce thanks to the prototype device.

Congratulation to Bill Briggs for a moving and inspirational article. 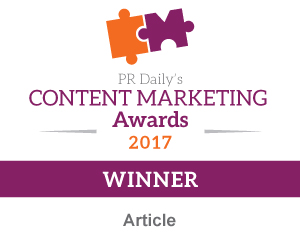