In mid-2016, the Tekserve computer repair shop in New York City auctioned off everything after its 30 years in business, including its co-founder’s private collection of Apple Computer products dating back three decades. MacPaw, a software developer that makes applications for Mac, acquired the collection and shipped it to its headquarters in Kiev, the capital of Ukraine. For its action, MacPaw has won first place in the “Brand Loyalty” category of PR Daily’s 2017 Content Marketing Awards.

Tekserve predated official Apple stores by a decade and, unlike today’s glossy, high-tech stores with their genius bars, Tekserve focused more on the tech history, including the co-founder’s 35-piece collection, which he called “the Mac Museum.”

MacPaw bought the entire collection, including a Macintosh 128K autographed by Stephen Wozniak and more than 40 classic Macintosh devices from Lisa and NeXT Cube, and created its own museum in its headquarters, making the machines available to the public. By producing a video about the Apple museum (along with a blog entry), MacPaw attracted the attention of tech media, which covered the story.

Congratulations to Julia Petryk, Jane Palash and Oleksandr Kosovan for preserving the history tied up in those machines that are so meaningful to Apple fans. 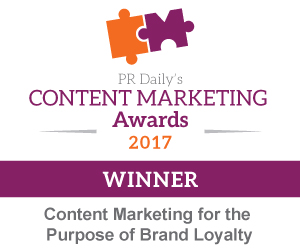