Light bulbs. Tape measures. Piggy banks. Handshakes. Targets. You have seen these images employed by marketers over and over again. What better way for a marketing agency to convey that its ideas are more original than by shining a light on what’s not—worn-out clichés like these? That’s what Stein IAS did, winning first place in the “Content Series” category of PR Daily’s 2017 Content Marketing Awards.

Stein IAS produced its video series and released it through its partnership with the publication The Drum. Each video features experts from the likes of Google and Adobe talking about what the featured cliché is supposed to convey and why it doesn’t work, along with examples from the real world of B2B marketing and advertising.

The video series grew out of a book, “101 Clichés,” which the organization published in 2007. The 12 fast-paced videos are longer than conventional wisdom suggests is appropriate for the easily bored audience for web videos, but each one compels you to watch to the end. Even the narration is spot-on.

Not only did the videos earn respectable views directly on YouTube through The Drum’s channel—getting 10,000 total views—it also attracted 2,000 new website visitors and 200 requests for the book. More important, Stein IAS was able to use the videos in its pitches for new business, leading to several new client engagements.

Congratulations to Reuben Webb, Tom Stein, Dave Croucher and Chris Place, along with the rest of the talent whose names appear in the credits at the end of each video. 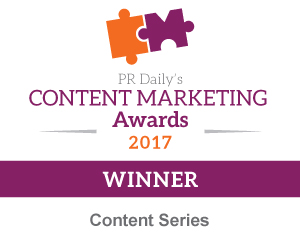