Marriott’s social media command center, M Live, discovered that players of the smartphone game Pokémon Go had brought their game play to Marriott properties. With gamers capturing the elusive Pokémon characters in Marriott guest rooms, pools, restaurants, conference spaces, and other public spaces, the M Live team identified an opportunity to build buzz for the brand’s loyalty program, Marriott Rewards, by breaking through the unprecedented amount of noise that had risen with the game’s popularity. Its success has earned Marriott first place in the “Influencer Marketing” category of PR Daily’s 2017 Content Marketing Awards.

It all centered on Nick Johnson’s quest to become the first gamer to catch all 145 Pokémon Go characters. He achieved the feat in the United States, but then sought to capture the remaining characters accessible only outside the U.S.

M Live and Marriott Rewards engaged Johnson to travel the globe, knowing they would drive a high volume of social media engagement, reach and PR impressions along the way. Through Johnson’s travels, Marriott PR worked to spread the word with leading news agencies while gamers and observers followed the story on the full range of social channels.

Ultimately the campaign scored coverage in 800+ global news outlets and achieved 281 million PR impressions and 9 million Twitter impressions—all for the cost of Nick’s travel, which amounted to $3,325. 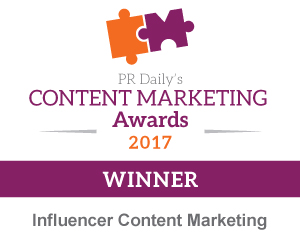