King Abdullah University of Science and Technology (KAUST) opened its academic doors just eight years ago, and with a significant investment to build a global research and education university from the ground-up, it attracted a top-flight international faculty and made an impression in the academic world in short order. Building upon a momentum of progress, the University decided to promote its interdisciplinary research culture by showcasing its people and their ideas through intelligent and consumable story-telling for audiences within Saudi Arabia and around the world. Its effort to change that has earned KAUST first place in the “Print Publications” category of PR Daily’s 2017 Content Marketing Awards.

To raise its profile, the university opted to produce a print magazine based on its new research-focused news website. The magazine’s goal was to promote the research emerging from KAUST in a consumer-friendly format.

The first three issues have earned considerable attention: Even Peter Wiley of Wiley Publishing sent an unsolicited note conveying his admiration for the magazine. The subscriber list grows exponentially with each issue; the third issue brought an impressive 40 percent growth in the subscriber base. The publication has also driven traffic to the Discovery website.

Congratulations to the KAUST Discovery team for a print publication with gorgeous design and accessible writing. 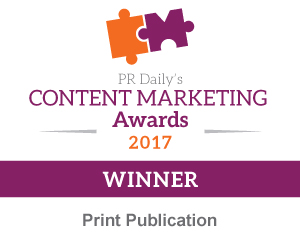