Johnson had already captured all the Pokémon characters available in the United States, a fact that came to Marriott’s attention thanks to the social media monitoring of its M Live team. M Live saw the potential to tie Johnson’s quest to the hotel chain’s loyalty program, Marriott Rewards.

It cost Marriott only $3,325 to cover the costs of Johnson’s travel (including seven nights at Marriott properties on three continents). In exchange, hundreds of thousands of people followed his exploits as M Live shared them across Twitter and Snapchat. (In fact, it was M Live’s real-time monitoring of Pokémon Go exploits in various parts of its hotels that got them started on the campaign in the first place.)

The coordinated effort to share Johnson’s exploits attracted media attention, resulting in more than 800 global news outlets covering the story, which produced 281 million total PR impressions (including 9 million impressions on Twitter alone). Most of the news coverage and much of the social media sharing noted Marriott Rewards’ involvement, producing massive ROI for a minimal investment. 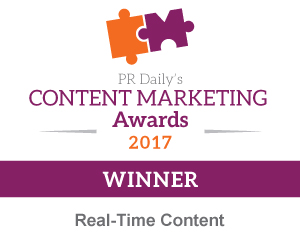