The National Fire Protection Association’s 120-year-old mission remains largely unchanged: ending death, injury, property and economic loss caused by preventable fires. A somewhat newer NFPA initiative is to have new homes built with sprinkler systems that meet regulatory requirements. Its success in getting the message out has won the NFPA first place in the “Audio Storytelling” category of PR Daily’s 2018 Content Marketing Awards.

The sprinkler technology can reduce the risk of death in a fire by 80 percent and property loss by 70 percent. Statistics, however, don’t get the point across the way storytelling can.

In recent years, a new form of podcasting has emerged: the limited-episode podcast that tells a story (as the host of the podcast “Serial,” Sarah Koenig, does week by week). The NFPA’s Fred Durso and Kyle MacNaught saw this as an ideal approach to convey the risks and long-term consequences of fire. They focused on the van Dijk family, which lost two children in a house fire.

The series that resulted, “The Survivors,” uses five episodes to explore different dimensions of the fire—from the family’s experience to the physical and emotional trauma experienced by burn victims, and from the new-home fire environment to the role sprinklers could have played in the van Dijk home.

Narrator Durso traveled to Wyoming to interview a host of people, including family members, neighbors and other residents. He visited the Utah burn center that treated the father and continues to treat his son. National safety advocates added depth to the reporting, which was edited into a compelling series that was released during Fire Prevention Week, when the group’s website experiences heavy traffic.

The series has been downloaded 7,000 times, enough for any organization to grasp the potential of the format.

Congratulations to the NFPA’s Fred Durso and Kyle MacNaught. 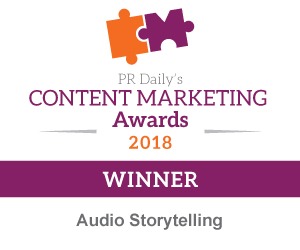