Artificial intelligence (AI) has not been faring well in Canada, which ranked ninth out of 10 countries in successful AI deployment according to a 2018 assessment. Only 68% of organizations in Canada had adopted AI, behind the global average of 72%. Only 31% of Canadian respondents called their AI implementations a success, compared to 51% globally.

Microsoft Canada, with its significant AI offerings, knew something was needed to kick-start AI in the country, a challenge complicated even more by negative media coverage. How Microsoft chose to tell the story—and how it brought the story to life—has earned the company first place in the “Audio Storytelling” category of PR Daily’s Content Marketing Awards.

Based on the rising popularity of podcasts in Canada, the company planned a six-part series on AI (along with a trailer to introduce the series), co-produced in partnership with the Globe and Mail, whose editorial authority would help reach a diverse audience of business leaders, tech enthusiasts and general consumers.

The Microsoft and Veritas Communications team worked closely with the Globe’s content studio to create “AI Meets World,” each episode exploring a distinct facet of AI from a consumer perspective. The series created an accessible look at AI by comparing fictional AI (like the Terminator) to real-world applications.

The PR team prepared interviewees with messaging in briefing books to help drive the narrative around Microsoft solutions, innovations and initiatives. Pop culture references were woven into the scripts that were built around the interviews.

The series achieved more than 12,000 downloads, far above the benchmark for podcast downloads. 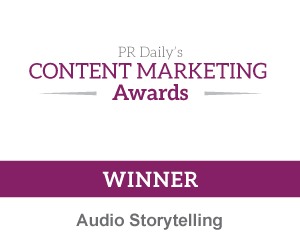