Clarity, an integrated marketing agency, had been working for Entrupy since the company’s launch. Entrupy is a software-as-a-service company that employs a variety of techniques to bring trust to transactions of high-value physical goods, authenticating luxury products from brands like Louis Vuitton and Chanel.

Clarity had already obtained coverage for Entrupy; the agency was now ready to position Entrupy as a go-to resource for information on the market for counterfeit products. The report Clarity developed to achieve this goal has earned the agency first place in the “Brand Awareness” category of PR Daily’s Content Marketing Awards.

Nobody had ever undertaken an effort like this, which meant Clarity had no model from which to work. The agency began by gathering two years’ worth of data and establishing categories for comparison in an effort to determine what comparisons might prove interesting.

The effort took two months followed by another three months spent writing a report—“State of the Fake”—which included insights and points of interest (such as the fact that Louis Vuitton is counterfeited more than any other brand). With a budget limited to the agency’s retainer, the production of the finished report was performed entirely on the online tool Canva.

The finished report was set for launch on World Anti-Counterfeiting Day, June 6, 2019. Embargoed pitching began before the report was finished, leading to media meetings with key A-list publications, including Reuters, Financial Times and Women’s Wear Daily.

The reach of the coverage that followed exceeded 16 million, and The Wall Street Journal interviewed Entrupy’s CEO for a future story. The coverage resulted in Entrupy doubling its website visits. 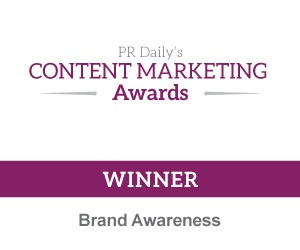