Although the insurance industry may provoke yawns among consumers, it’s like any other business: It runs on the work of real people engaging with customers and other stakeholders. AmTrust Financial launched its content campaign, AmTrust Inspired, in April 2019 to showcase the strength of the relationships between the company and its agents and customers. The campaign has earned AmTrust Financial first place in the “Financial Services Campaign” category of PR Daily’s Content Marketing Awards.

The brand awareness campaign was aimed primarily at AmTrust appointed and nonappointed agents, with small business owners serving as a secondary target. The kickoff video from the Los Angeles Farmers Market anchored the campaign, with subsequent videos focusing on different insurance businesses each quarter.

The campaign has been amplified through a variety of sources including a website landing page, social media (mainly Facebook and LinkedIn), quarterly emails to agents and a blog. Since the campaign launched, the landing page has had 4,900 views.

The blog for the initial phase of the campaign attracted 561 page views; posts will be further amplified in the quarterly email sent to agents. The introductory email, which featured a video and links to the landing page and blog post, led to 561 landing page views in a single day; the click-through rate of 3.2% represented a 56% increase over the insurance industry average. The social media effort has delivered more than 900,000 impressions with an average engagement rate surpassing previous campaigns. 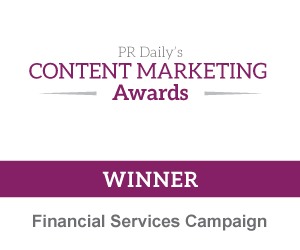