The world’s marine ports are due for change following a decade of underinvestment; the decision makers in port systems were starting to talk about automation, which was also a growing focus of web searches, according to analytics. These conditions were perfect for Trelleborg’s marine and infrastructure operation (TM&I) and its agency, Stein IAS, which has won first place in the “Lead Generation” category of PR Daily’s Content Marketing Awards.

TM&I had already invested resources in owning the content space for all things port-related: If there was an event, a TM&I executive delivered the keynote. If there was an article, communicators made sure TM&I spokespeople were quoted. The company produced the most prominent white papers and reports in the business. The company had also built solid relationships through deep research into the key players in the industry.

TM&I’s efforts began with a report on “Big Data in the Maritime Industry,” promoted via outbound email, YouTube, Twitter, LinkedIn and media placements. An email campaign promoted two follow-up assets to those who downloaded the report: a video series looking at port automation and a product showcase. The campaign well and truly ultimately delivered. Congratulations to the Stein IAS team for their efforts on behalf of TM&I. 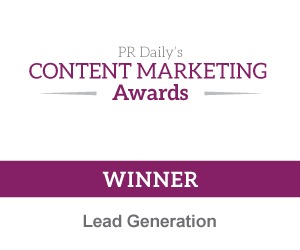