Like many blogs from health institutions, Healthy Balance from UVA Health sought to position the system as a leading source of health and wellness information, drive traffic to the system’s website and build relationships with prospective consumers of UVA’s health system. Its strategy for increasing the blog’s reach has earned first place in the “Newsjacking or Trend-Related Content Marketing” category of PR Daily’s Content Marketing Awards.

The blog had performed well, with more than 162,000 sessions in 2017. However, the team noticed increasing competition from other sites providing similar content, even though most were not affiliated with hospitals or reputable national organizations. In an effort to regain momentum, the team embraced newsjacking, along with timely reporting of health trends (like probiotics) as a new focus for its content strategy.

The strategy included updating old posts. When actor Luke Perry died of a stroke, for example, the team edited a two-year-old article about stroke symptoms, adding information from the American Stroke Association and other sources. Within two hours of the first story appearing about Perry’s passing, the team shared the updated article on Twitter, leading to it becoming UVA’s most popular tweet ever, producing more than 10,000 engagements.

New stories were based on such topics as Jeopardy! host Alex Trebek’s announcement that he was being treated for pancreatic cancer and the Washington state measles outbreak. Trend reporting focused on topics like the HPV vaccine, spotting distress in teens and the risks of vaping.

The team set a goal of achieving 500 page views for each post; those based on newsjacking and trends achieved at least 1,000. Time on page has also improved, along with overall blog sessions. 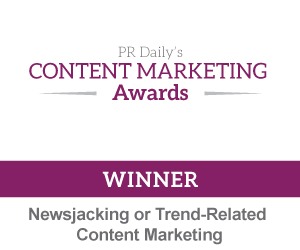