The Four Seasons Private Jet Experience has been a wildly successful travel offering for the hotel brand. Hundreds of guests have traveled to exotic destinations, opening the door to exclusive and sometimes life-changing experiences. In 2021, the Jet Experience will introduce a new custom-outfitted Airbus 321neo. An integrated marketing campaign was devised, which has won first place in the “Travel, Hospitality and Tourism Campaign” category of PR Daily’s Content Marketing Awards.

The services offered on this spectacular new aircraft include connecting with Four Seasons staff who showcase their regional specialties in intimate engagements with guests. The campaign created to bring the Private Jet to life featured rich storytelling, at the center of which is a documentary-style video series.

The prelaunch on social media began with the posting of clues on Instagram to build anticipation and tease an upcoming brand announcement. Instagram Stories was used to make users part of the countdown. The official announcement launched on social media as well as the channels of more than 100 Four Seasons properties around the world.

Media outreach ensured solid press coverage, and a Private Jet content hub was launched to house immersive imagery of the journeys available from the service. The campaign has generated 8.9 million impressions, 379,000 engagements and 1.6 million three-second video views. Video performance has been impressive, producing an 89.3% lift in ad recall and a 670.3% lift in brand interest. The PR campaign resulted in 511 media placements, including Travel + Leisure, Conde Nast Traveler and Vanity Fair. 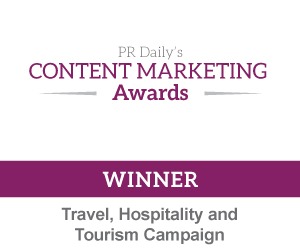