It’s such an easy word. Just a mere two letters. Yet it can also be one of the most difficult for any of us to say, particularly in a professional setting.

Whether it’s pressure coming from upper management or simply a request among colleagues, we often fear how our refusal or inability to either do or help with something at the office might otherwise leave us perceived in the workplace by our fellow associates, even if it means compromising ourselves in the process.

But what about those who are unable to say “no,” not because they can’t muster the courage at work to do so, but because they’re physically inhibited from it?

This is sadly the alarming reality encumbering a number of sexual assault victims who find themselves in compromising positions due to their own alcohol consumption.

Although much graver a concern than simply saying “no” in a corporate setting, Canada’s Edmonton Police Service (EPS) has made tackling this latter and serious issue a central concern of its own corporate social responsibility (CSR), a concern that culminated in the municipal force launching its “Don’t Be That Guy” awareness campaign in November 2010.

Whereas similar campaigns tend to target potential victims by urging women to restrict their behavior, research suggests this approach might not only be ineffective, but could also contribute to victims blaming themselves in an assault.

The EPS, therefore, decided to gear its effort toward potential offenders, those who are thereby responsible for the assault, as well as for stopping it.

Together with Sexual Assault Voices of Edmonton (SAVE), the EPS created the “Don’t Be That Guy” campaign.

Working with a tight advertising budget, the crusade was, at first, limited to posters in men’s washrooms at local bars. This was before being adopted by police services across North America and around the globe, as well as being featured in Cosmopolitan magazine.

Meanwhile, models in the ads were strictly volunteers, further lowering the costs of the effort.

Relaunched with a second round of posters in November 2012, the provocative campaign has quickly gained traction due to its direct and bold messaging. Examples include:

Addressing sexual assault without victim-blaming, the campaign has done more than put Edmonton on the map as a model of CSR for other cities and organizations.

According to Deputy Chief Doug LePard, the “Don’t Be That Guy” campaign has contributed to a turnaround in statistics on sexual offences in Vancouver, a rate that dropped in 2011 by approximately 10 percent—the first time in several years it had gone down.

This makes us at Ragan Communications all the more proud to honor the EPS and those proud to serve and protect their communities everyday with PR Daily’s 2012 Corporate Social Responsibility Award for Best CSR on a Shoestring.

Congratulations, and on behalf of those who were without a voice before, thank you. 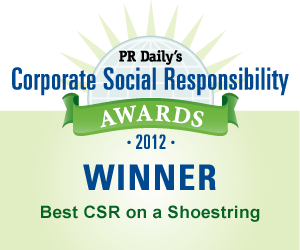