The Coca-Cola Africa Foundation’s (TCCAF) response to the Ebola outbreak in Western Africa was impressive, centering on a $200,000 donation that assisted health professionals on the ground working to prevent the further spread of the deadly disease. Through its partner, MedShare, TCCAF played a key role in the delivery of containers to affected countries carrying protective equipment, syringes, and other materials essential to the reduction of infection for health care workers, as well as to improve the level of service patients received.

Hill & Knowlton, one of the world’s largest public relations agencies, was tasked with ensuring TCCAF’s role was well known. Through a campaign that took advantage of both earned and owned media, four cornerstone documents were deployed, including a press release and a thought leadership piece. Core to the effort, though, was a partnership with the CNN Multichoice African Journalist of the Year Awards, a program with which Coca-Cola already had a five-year history. By establishing the Ebola outbreak as the program’s annual panel discussion topic, H&K turned the tables on journalists by using the panel to challenge the finalists—all journalists—to become the voice of Africa in the battle against the disease.

The results of the combined efforts included media coverage in key African nations, including 16 top-tier publications and broadcasts. Top journalists participating in the breakfast panel expressed enthusiasm, calling it the most successful ever; the subject matter also inspired other journalists to attend. H&K also developed an online community where participants could continue the discussion after the event was over. 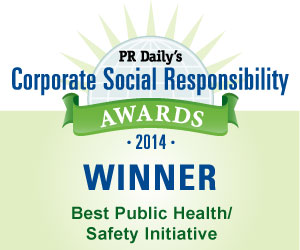