Seeking to make the workplace a laboratory for a culture change would improve working conditions and influence behaviors away from the job, if Con Edison’s strategy succeeded. Focused on the issue of bullying, the campaign was designed to raise awareness, educate employees, and lead to an environment in which everybody feels included and respected.

The company had a rationale for its “Stop. Think.” campaign beyond doing the right thing. Knowing that research found more than a quarter of employees in the U.S. had experienced abusive conduct on the job, Con Edison believed a culture of respect would improve productivity, morale, and reputation while reducing the risk of litigation.

Among the publications the company produced to drive these messages home were attention-grabbing collateral pieces, such as posters, wall clings, and table tent cards. Managers received a “Talking Points” document (via email) that featured a “You Make the Call” scenario drawn from a real-world workplace incident. These (and other) published materials were coordinated with seminars and other campaign elements to deliver impressive results, not the least of which is evidence that the culture at Con Edison truly is undergoing a transformation to one of respect and acceptance. 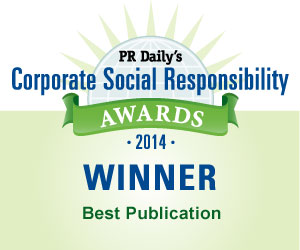