Since 2008, Pedigree has donated more than 20 million pounds of food to shelter dogs, demonstrating the impact nutritious food can have on these animals. The company challenged its agencies to bring the stories of these dogs to life, ensuring the message spread to and engaged customers.

The PR effort to raise awareness of Pedigree’s endeavors—and the importance of good food for the health of dogs—started with outreach to customers, asking them to share their stories in order to both raise awareness of the need to help shelter dogs and increase donations to the cause.

Supporting the effort was syndicated content featuring celebrity partners—MLB player David Ortiz, actor Josh Duhamel, and country music star Miranda Lambert, dog lovers all—appearing in videos and live appearances. In particular, Lambert donated time and influence to the effort to renovate a local shelter. Social media was employed, adopting the #DogTales hashtag, with Pedigree donating a bowl of food to a shelter every time the hashtag was used by a consumer to articulate what their dog meant to them.

The campaign paid off as a top-3 driver of Pedigree sales in 2014, earning 516 million impressions, surpassing by more than 100 percent the goal set for the campaign. Videos shared on Facebook earned 20 million impressions, and the #DogTales hashtag was the most widely used in brand history, generating some 430,000 interactions.

Pedigree and its PR partner, Weber Shandwick, offer a lesson in generating support for a charitable cause and are worthy recipients of the Grand Prize: CSR Campaign of the Year in PR Daily’s 2014 Corporate Social Responsibility Awards. 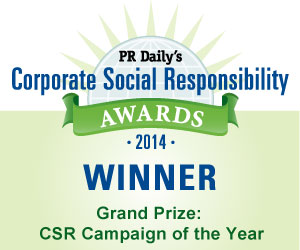