When advertising agency Scoppechio got involved in an effort to raise awareness and funds for clinical trials by the James Graham Brown Cancer Center, a nonprofit research facility in Louisville, Ky., it enlisted Benjamin Moore Paints to try something new and eye-catching: The opportunity to launch a paint-filled balloon at the side of a five-story building. The event not only created a work of community art, it won first place in the “Pro Bono Campaign/Project” category of PR Daily’s 2016 Corporate Social Responsibility Awards.

Dubbed “Splat Out Cancer,” the program targeted a number of donor groups, including those affected by cancer, Louisville area families, and urban millennials. The event featured the inventive theme, “Do Good. Be Bad. Exploit the power of art, color and fun to drown out the darkness of cancer with Benjamin Moore Paints.”

More than 1,700 people attended the event, and 630 donors registered before or during the “Splat Out Cancer” activity. Traditional media outreach produced a total of 21 million impressions. The event generated considerable coverage, and raised $100,000 that could potentially launch up to 50 new clinical trials undertaken by the Kentucky research facility.

And the artwork remains, a constant reminder of the work done by the research facility and the ongoing need for funds to battle cancer. 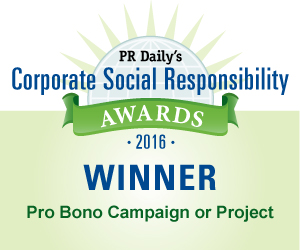