Aflac—the well-known insurance organization with the famous duck mascot—takes its corporate social responsibilities seriously. The organization recently passed the $110 million mark in support for childhood cancer treatment and research, and has appeared on Ethisphere’s “World’s Most Ethical Companies” list 11 years in a row. Yet a Reputation Institute report found that consumers weren’t aware of its good works. That revelation led to a multifaceted effort to raise awareness of Aflac’s CSR efforts. It also led to Aflac winning first place for “Campaign of the Year” in PR Daily’s 2017 Corporate Social Responsibility Awards.

Aflac had several goals: Position its executives as thought leaders on ethical business practices; elevate the organization’s reputation for diversity; raise awareness of its commitment to childhood cancer treatment and research; and communicate its sustainability goals and accomplishments.

Already known for its surveys, Aflac conducted one to assess consumers’ and investors’ views of how and why organizations can and should serve the community, enabling the campaign team to align its efforts with business drivers and identify key dimensions of reputation, including citizenship, workplace and leadership.

The survey was just one of the research components that drove a campaign that involved social media, placement of bylined articles, sponsorships for cancer awareness events, publication of a CSR report, a satellite media tour and a host of other activities. Among its results was a 3.4-point increase in the organization’s Reputation Institute Pulse score, moving Aflac from an “average” to a “strong” reputation ranking.

Other indicators rose dramatically as well, with each of the campaign’s components delivering strong metrics—such as a 454 percent increase in average monthly Facebook page impressions. 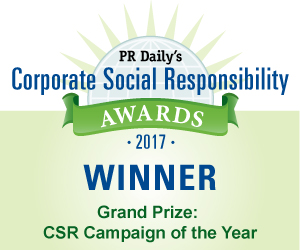