Girls4Tech is a five-year-old education program developed by Mastercard for young girls worldwide. Tapping into its employees’ expertise in payments technology, the goal of Girls4Tech is to inspire girls to build their STEM (science, technology, engineering and mathematics) skills. Mastercard’s efforts have earned it first place in the “Community Affairs” category of PR Daily’s 2018 Corporate Social Responsibility Awards.

As other organizations have noted, 80 percent of the jobs created in the next 10 years will require STEM skills, but only 30 percent of the science and tech workforce is currently composed of women. A poll of Mastercard employees found that 77 percent derive job satisfaction from volunteering through company programs, consistent with industry-wide research that confirms most millennials review a company’s CSR record when selecting an employer.

Further, Mastercard learned that the 4,000-plus new employees who joined the company through acquisitions needed to be engaged, leading to the decision to position female technologists as role models and mentors in developing a curriculum that would use concrete examples of how science and math standards factor into various professional fields that are vital to Mastercard’s operations (such as fraud detection, big data and cryptology).

Ultimately, the hands-on, inquiry-based curriculum became the company’s first global volunteer program in its 52-year history. Girls4Tech has been translated into nine languages since its launch in six locations where the company had acquired businesses, including London, Brisbane and Warsaw.

The program also partnered with UN Women Singapore and Be Better China, reaching 75,000 girls, and celebrated the International Day of the Girl by announcing a goal of reaching 200,000 girls by 2020. Twenty-six percent of Mastercard’s employees have served as role models and mentors.

Congratulations for the program executed by Susan Warner, Elena Rutherfurd and Lauren Ottulich. 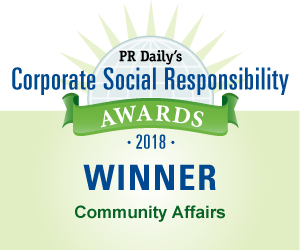