VSP (Vision Service Plan) developed its on-the-ground disaster relief program, “Eyes of Hope,” in the wake of Hurricanes Katrina and Rita in 2005. The program focuses on supporting VSP network doctors and their patients, pitching in to help them rebuild their practices and their lives. It’s won first place in the “Video or Visual” category of PR Daily’s 2018 Corporate Social Responsibility Awards.

The program kicked into high gear in 2017 with Hurricanes Harvey and Irma, helping doctors rebuild their practices and offering no-cost replacement eyewear for affected community members in need.

Although the program was not dramatically different than it had been in prior years, the company’s corporate communications team was  determined to take a fresh look at “purposeful storytelling” during and after the disasters. The team took advantage of multiple social media channels to tell a consistent and shareable story based on the emotional tales emerging from the scenes of these historic natural disasters.

Three core videos anchored the effort. Titled “When Waters Rise,” the video series featured varying perspectives of consumers, doctors and employees sharing their experiences. Shorter cuts of each video allowed VSP to share stories on channels that do not accommodate longer-form content, such as Twitter and Instagram; the full-length videos were shared on Facebook, the VSP Blog and internal channels.

These three videos were supplemented with “in the moment” content—raw video captured during VSP’s outreach efforts. These, too, were shared across social media channels.

The varying video formats enabled VSP to tell a continuous story about how important access to eye care can be during a natural disaster. The team produced 50 social posts across Facebook, Twitter and Instagram, along with four posts on the company’s blog.

Congratulations to VSP for an outstanding effort. 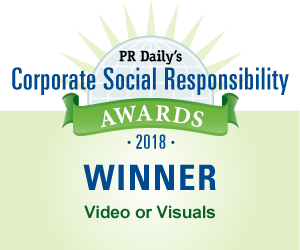