Third-party reports and reviews matter mightily in the effort to achieve results online. Public relations network TRACCS recognized the importance of these third-party endorsements when called upon to turn around the bottom-of-the-barrel reputation of Zain Bahrain, a telecommunications operator that found itself suffering from perceptions of poor customer service as new competition flooded its marketplace.

By conducting monthly gatherings with influential local bloggers—dubbed “Zweetups” in a play on the more common “tweetup” label—these face-to-face gatherings connected bloggers with call center agents so they could listen in on real service calls. By engaging lifestyle bloggers instead of tech bloggers, the Zweetups led to posts and updates that reached consumers instead of a tech audience, while call center staff—knowing their efforts were now routinely scrutinized in the social media space—worked to improve their performance. As a result, the response time for online queries has dropped from more than three hours to 30 minutes, while positive sentiment increased by 500 percent as Zweetup participants became brand ambassadors through their own social channels.

We’re pleased to honor the teams from TRACCS and Zain Bahrain for addressing the crisis in consumer confidence in so engaging a manner, by awarding them the prize for Best Crisis Management in PR Daily’s 2014 Digital Awards. Congratulations. 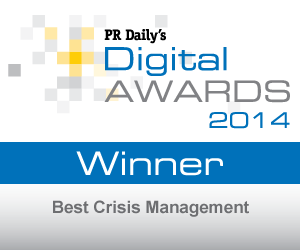