Talking to people about the consequences of excessive alcohol consumption is a tough sell, but Makovsky Health  and The BMJ found a way to use an infographic published in a prestigious medical journal to get almost half a billion people to do just that. This remarkable feat was accomplished by calculating just how much Ian Fleming’s iconic spy, James Bond, actually drank throughout his career as chronicled in the Fleming novels.

Adopting a visual theme familiar to Bond fans (and casual observers) thanks to the movies, Makovsky Health and The BMJ supported the infographic with a white paper and press release, as well as media outreach that ranged from the traditional (offering reporters five days to review the embargoed report so they could develop articles) to the modern (contacting targeted reporters via Twitter). As a result, the infographic inspired more than 180 articles in some leading news outlets. The viral nature of the infographic led to 15 million shares on Twitter.

We congratulate Lee Davies, Jon Florio, and Kyle Kosterich for taking home top honors in the Best Infographic category of PR Daily’s 2014 Digital PR Awards. Their effort is one of the more creative approaches to a serious issue we’ve seen in years, and all the more so since we know the infographic was developed and approved in a blink-of-the-eye 48 hours. 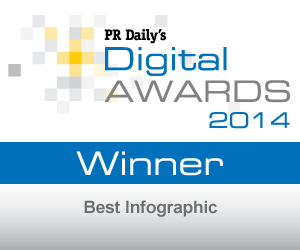