In some countries, the cost of sending athletes to the Olympic Games is covered by the government. Not so in the U.S., where the United States Olympic Committee—a nonprofit organization—relies on public support not only for Olympic athletes, but for those participating in the Paralympic Games as well.

In order to drum up support for the recent Sochi Olympics, the USOC made it possible for Americans to support their athletes for a mere $14—and get a pair of limited-edition “Go USA” mittens in return. With mittens in hand, supporters were encouraged to share photos of themselves with their mittens accompanied by the hashtag #RaiseYourHands, which reflected the theme of a broader campaign.

The branding was introduced in a four-day USOC media event, and continued with media appearances by athletes, outreach to key stakeholder audiences, a collection of videos, and a comprehensive collection of other activities, all designed to generate interest in the effort, leading to mitten sales and media coverage. Ultimately, more than half a million pairs of mittens were sold and nearly 50 million media impressions earned.

We offer our hearty congratulations to the cross-functional marketing team led by the USOC’s marketing, communications, and development units for its win in the Best Marketing Campaign category of PR Daily’s 2014 Digital Awards. 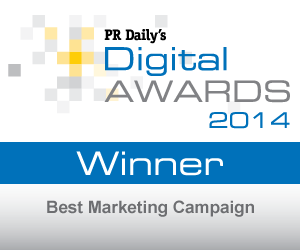